In writing this article I consulted senior DEA Special Agents who have worked extensively with the Jungla commandos in Colombia. Their identities have been withheld by request.

The Jungla Commandos, or Compañía Jungla Antinarcóticos (Counter-narcotics Jungle Company; JUNGLA), as they are properly known, are Colombia’s premier national counter-narcotics (CN) interdiction unit. Falling under the Dirección de Antinarcóticos (Directorate of Counter-narcotics; DIRAN) of the Policía Nacional de Colombia (National Police of Colombia; PNC), the Junglas were formed from 120 men in 1989, with the support of both the US and UK. The first course, in 1989, was conducted with training from the British Special Air Service (SAS), although the US Army’s 7th Special Forces Group (7th SFG(A)) provided some behind-the-scenes support and translators. The SAS continued to take the lead until 1991, when US Special Forces took over primary responsibility. In 1998, training responsibility was handed off to the JUNGLA cadre, with ongoing US support.

In recent years, training has been supported primarily by the US Drug Enforcement Agency (DEA) and US Army Special Forces. DEA agents embed with the Junglas during High-Value Target (HVT) capture and interdiction missions, as well as providing specialised tactical and firearms training, and the US Army provides specialised land warfare training. Funding comes primarily from the US State Department’s Bureau for International Narcotics and Law Enforcement Affairs (INL) and the Narcotic Affairs Section (NAS) at the US Embassy in Bogotá. The US Department of Defense, Central Intelligence Agency (CIA), Immigrations and Customs Enforcement (ICE), and other US government entities have also been involved in training and providing support for the Junglas. According to sources I spoke with, the Junglas have very little crossover with the Colombian military; however they have conducted some joint operations with the Fuerza Aérea Colombiana (Colombian Air Force; FAC). It is also believed that British MI6 agents (and possibly SAS and SBS personnel) continue to support interdiction efforts in Colombia.

END_OF_DOCUMENT_TOKEN_TO_BE_REPLACED

Security was tight. With the dozens of beret-clad and armed POLRI, squads of the special reaction unit (Gegana) dressed in black, military police, army, and rooftop snipers, journalists and onlookers were more concerned about getting on their wrong side that morning than of any terrorist attack.

However, once the Australian Prime Minister arrived to pay her respects to the victims of the 2002 Bali Bombing, all eyes were on her. In Bali for the ASEAN and related summits, the PM’s visit to Ground Zero was a small yet symbolically important part of her tightly-packed schedule.

Australia-Indonesia diplomatic relations have had a number troughs over the past twelve months. A few days ago, Indonesia’s foreign minister and military chief voiced their respective concerns about the newly-announced initiative to place US Marines in Darwin from 2012 (with the FM noting he’d only been told informally a few days prior to the announcement). Add to that a Prime Minister who has publicly stated that foreign affairs is not her forte, failed to coordinate with her Foreign Minister on policy changes, and announced asylum seeker initiatives without alerting the countries in question.

END_OF_DOCUMENT_TOKEN_TO_BE_REPLACED 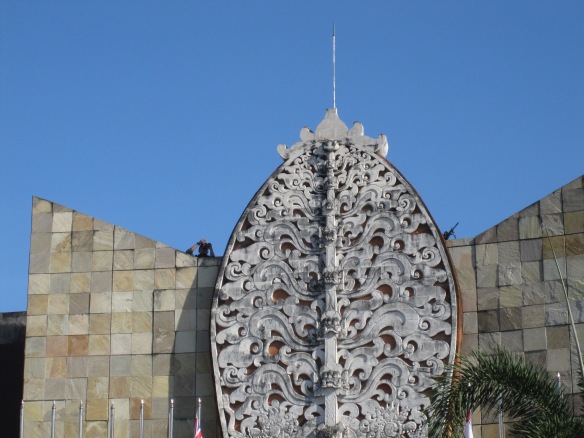 From the top of the Bali 2002 Bomb Memorial, two snipers (above) kept watch while Prime Minister Julia Gillard and other officials paid their respects yesterday morning.

Dressed in black, complete with facemasks, the snipers were most likely from Detachment C (anti-terror) of Gegana, a branch of Indonesia’s special operations police force (BRIMOB) and ostensibly tasked with police special operations duties.

END_OF_DOCUMENT_TOKEN_TO_BE_REPLACED

Some of the information in this update was provided by a KRISS SYSTEMS spokesperson, in response to my queries.

The KRISS K10, discussed briefly in my earlier piece here, represents the evolution of the KRISS Vector SMG. The K10 will be designed as a multi-calibre platform, supporting .45 ACP, 9x19mm NATO and .40 S&W. These three calibres are the most popular handgun cartridges in Western military and law enforcement use. The lower receivers will be interchangeable, allowing operators to easily switch between calibres, should they desire. The new submachine gun will also feature a quad-Picatinny rail fore end, giving the firearm a lot more flexibility for mounting aftermarket accessories.

The K10 will, of course, be based around the KRISS Super V System (KSVS), making use of in-line design and asymmetrical recoil (the ‘vectored bolt’ technology) to greatly reduce felt recoil and muzzle climb. The K10 also features a much larger charging handle (that can be reconfigured to suit left or right handed shooters), a telescoping, five-position stock (unlike the Vector’s folding stock), an ambidextrous magazine release on the fore grip, and a muzzle designed to accept KRISS DEFIANCE series suppressors. A proprietary magazine is also being developed, and this will reportedly be interoperable with another KRISS weapon under development, the KARD. Limited information on the KARD can be found here, and here. I have been informed that the KARD is an ongoing project, and that no date has been set for its release as yet.