From the top of the Bali 2002 Bomb Memorial, two snipers (above) kept watch while Prime Minister Julia Gillard and other officials paid their respects yesterday morning.

Dressed in black, complete with facemasks, the snipers were most likely from Detachment C (anti-terror) of Gegana, a branch of Indonesia’s special operations police force (BRIMOB) and ostensibly tasked with police special operations duties.

A few quick facts about the unit:

Later that day, I gained access to the rooftop of the building behind the Memorial to check the viewpoint of the snipers.

Looking down on Bali 2002 Bomb Memorial:

The back of the Memorial: 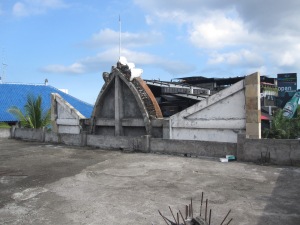 Just a quick post for now; more to come on yesterday’s security and what Gillard’s visit to the Memorial signifies.