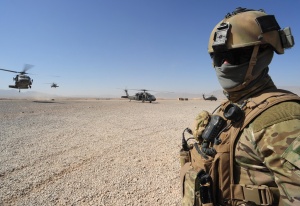 The brown dust from the departing choppers that carried the SAS squadron south from their base at Tarin Kowt had barely cleared when all hell broke loose. It was October 2010, at the height of the Afghanistan fighting season, and a large Taliban force had established numerous firing positions around heavy machineguns. More than 24 elite Perth-based Diggers from the Special Air Service Regiment were under withering fire. Realising his mates were in grave danger, and with no regard for his own welfare, the SAS Corporal charged headlong into the Taliban machinegun fire. The sight of the 202cm Australian warrior coming at them must have shocked the bearded Afghans.

It was a little more action-packed than your run-of-the-mill defence article, but I was still sipping at this stage. However, what I was about to read next—an excerpt from an earlier battle during which Corporal Roberts-Smith earned his 2006 Medal for Gallantry—put me off my Earl Grey:

During that fight, according to comrades, “RS” tore a Taliban fighter off his back like an insect, stood on his throat and shot him dead.

I didn’t know whether to laugh or cry.

Reporting on the conditions facing members of the Special Operations Task Group (of which the SAS is a part) is a necessary part of painting a picture of the war in Afghanistan for the Australian public. On the other hand, against a context of information scarcity on the conflict, the sexed up nature of McPhedran’s description was uncomfortably magnified.

I wish to make clear that my issue with McPhedran is not ad hominem. My issue is with the lack of consistent and informative reports available about the ADF in Afghanistan, brought to light by the nature of McPhedran’s article.

Defence’s tight grip on information flow has been striking and to its detriment. In July of last year, journalist Chris Masters imparted to an audience at the Lowy Institute the frustrations involved in trying to report on ADF activity. In November, Prakash Mirchandani pointed out an inconsistency in Defence’s stance on Wikileaks by highlighting the conflicting opinions of two frontline young officers interviewed by an embedded journalist and the Minister for Defence Stephen Smith. The same month, Monash University held a conference on information warfare during which it was revealed Australia was the most restrictive in providing access to defence correspondents in Afghanistan.

We owe it to the Australian public and to members of the ADF to depict an honest and comprehensive picture of Afghanistan. The mental image of an SAS soldier with his foot on the throat of an enemy is a rather confronting one. It would be a shame if it turns out to be the most striking.

Postscript: For those of you interested in reading about the SAS, let me steer you first towards In Action with the SAS by military historian David Horner, before pointing out McPhedran’s books, The Amazing SAS and Soldiers Without Borders: beyond the SAS. Or, Matthew Reilly.

Photo courtesy of Department of Defence