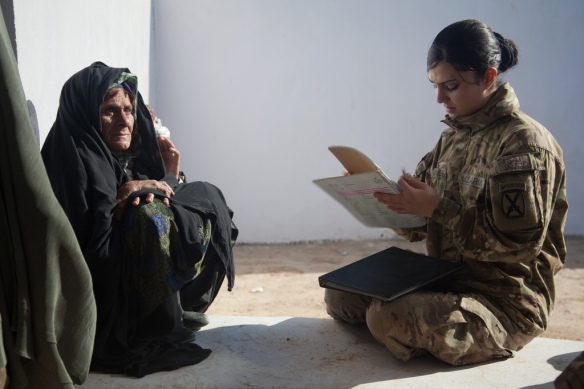 I am interested personally and professionally in greater female involvement in the military and so I have wanted to write about Female Engagement Teams (FET) for a while. FET are all female teams of American and British military personnel trained to engage with local Afghan women and children as part of the population-centric dimension of COIN strategy in Afghanistan, as directed by former COMISAF General McChrystal (see ISAF directive on FET, PDF).

In terms of effectiveness, from most reports, FET members have provided basic medical care, negotiated with shura elders to develop alternative ways for their women to generate income, reported on matters such as schools and wells, and attempted to provide reassurance to communities of ISAF’s presence and commitment. Over the past few months, I have followed FET developments in the media (here’s my pick FET photo essay) and official military blogs.

But in the midst of following this female-led initiative, I have noted that in practice several aspects of this venture are contradictory to its overarching goal of building confidence and support for the Government of the Islamic Republic of Afghanistan (GIRoA) and ISAF. A story run by Stars and Stripes that documented a FET Marine’s triumphant “stand” against her male Afghan soldier escort seemed contrarian to the overall spirit of military-population engagement that it seeks to foster, so I wanted to know more.

My tentative conclusion is thus: while the immediate benefits of FET such as medical care given to women and children are commendable and important, in the medium to long term, the prospects of achieving some measure of improvement to the lives of certain Afghan women and supporting GIRoA are grim.

The program creates a false expectation that down the track GIRoA can and will provide for the needs of Afghan women in contact with FET and those who, hearing of FET visits, are waiting for them. This is a concern because so far GIRoA has shown a worryingly patchy record of looking after Afghan women and their issues. Moreover, the perception that FET is geared towards improving the lives of Afghan women and their families is openly promulgated by members of the US’ Human Terrain Analysis Teams, lending further weight to the high expectations of this program. How will these practices continue, if at all, once ISAF leaves? While this question perennially looms over foreign aid and development programs in Afghanistan, it remains unaddressed in the context of FET-related activities. If GIRoA fails to deliver on FET promises, its integrity will further suffer. This is hardly confidence-building.

Even if the program supports GIRoA through intelligence gathered, the practice alone of accessing Afghan women through enquiring and attending to their basic needs which leads to the raising of expectations has, sadly, a rather exploitative tinge to it.

If FET members are seeking to build ties between GIRoA and the Afghan population, considerable time and effort are needed. Repeated and frequent visits are not always possible; FET members regularly encounter myriad practical challenges in order to meet Afghan women, from carefully synchronising their visits with patrols in the area to working around the desperate shortage of female translators.

If FETs are to have medium- to long-term effects, then surely more enduring cooperation with and greater confidence in GIRoA would be best facilitated via the Afghan National Security Forces, especially female members. However, hiring and training female soldiers and policewomen is currently a difficult undertaking; for instance, trainers straddle cultural roadblocks and the anguish of having students murdered for being policewomen. Moreover, recruitment numbers are low and conditions are dangerous; in 2008 Afghanistan’s top-ranking policewoman was shot by the Taliban for refusing to quit work.

There are other points regarding FET to note; John Stanton, in his blog post, also highlights the lack of standardised training for FETs and the problematic underpinnings of FET such as the assumption of female influence “behind closed doors”.

All in all, I accept that, due to operational security, information and data on the ground on this initiative are hard to come by. No doubt, FET members work hard and bring some measure of immediate happiness to their Afghan female hosts. I am pleased to see women take a prominent role in the military and support the members of FET. However, there remain unanswered questions about the medium to long term outlook and, as a result, this, in my opinion, undermines the program as a whole. In a post celebrating the apparent successes of FET, Tom Ricks quotes an “internal summary”:

“In one home, the women said they had caught glimpses of the patrolling FET through a crack in the wall and that they had ‘prayed you would come to us’.”

One can only speculate on the fate of these women and the future they hope for when their “guardian angels” leave.

Post script: Here is a similar critique (including some good pictures) of FET by blogger Rachel Robb who is stationed in Kunar province.