HNLMS Evertsen on patrol off the Horn of Africa, as part of  NATO’s Operation Ocean Shield.

HNLMS Evertsen is one of four De Zeven Provinciën class air defence and command frigates in service with the Royal Netherlands Navy (Koninklijke Marine). Evertsen is the youngest of the four, having been completed in 2003 and commissioned in 2005. These ships superseded the two smaller Tromp class frigates, decommissioned in 1999 and 2001. Despite being classified by the Netherlands Navy as frigates, their displacement (6,050 tonnes), complement (202 + 30 aircrew), and role make them comparable to many destroyers. They are similar in these respects to the RAN’s planned Hobart-class Air Warfare Destroyers (AWD).  The Netherlands Navy also intends to use the De Zeven Provinciën class in a limited Ballistic Missile Defence (BMD) role, having recently awarded a contract for modification of the ships’ Thales SMART-L and APAR radars. According to an article in January’s Proceedings magazine, these modifications are expected to be complete by late 2017. It should be noted that the currently planned modifications only endow the class with the capability to detect and track ballistic missile threats, and do not provide for surface-to-air interceptor missiles.

END_OF_DOCUMENT_TOKEN_TO_BE_REPLACED 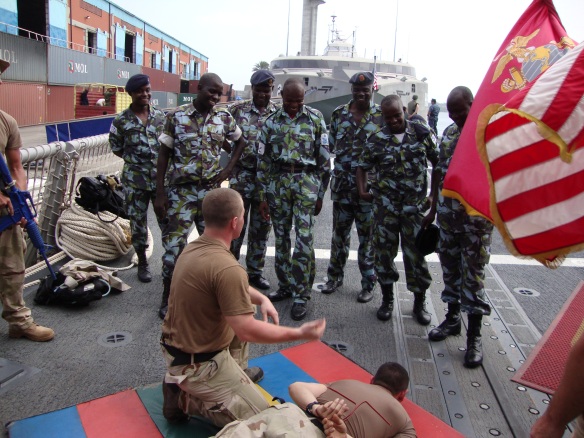 West Africa[1] today is plagued by a variety of serious maritime security (MARSEC) concerns. Illegal, Unreported, and Unregulated (IUU) fishing, trafficking of persons, arms, and drugs, oil bunkering, illegal migration, and piracy have contributed to a maritime environment characterized by crime and corruption. The costs of these illegal activities are significant; the cost of illegal fishing alone is over $1 billion US Dollars annually, and an estimated 600,000 people are trafficked illegally each year[2]. Pirate attacks targeting oil product vessels in West Africa are occurring with increasing regularity, and are becoming increasingly violent. Like much of the rest of Africa, the nations of West Africa have traditionally held a land-centric view of security. National navies, as well as other maritime entities such as coast guards and fisheries patrols, have never been in the vanguard of training or financial investment. Despite this, recent years have seen a renewed focus on maritime security in West Africa, driven by concerns of piracy, threats to oil production, and international programs of assistance. Many nations and organizations have strategic interests in building strong MARSEC partnerships with West African nations, most in the hopes of protecting or establishing maritime enterprise relationships. The United States Department of Defense (DoD) Strategic Doctrine for 2012, Sustaining U.S. Global Leadership: Priorities for 21st Century Defense, discusses the importance of partnerships around the world, including those in Africa. This document sets forth a goal to “become the security partner of choice” in nations of interest, and advocates an “innovative, low-cost, and small-footprint approach”, with an emphasis on exercises, rotational presence, and advisory capabilities.