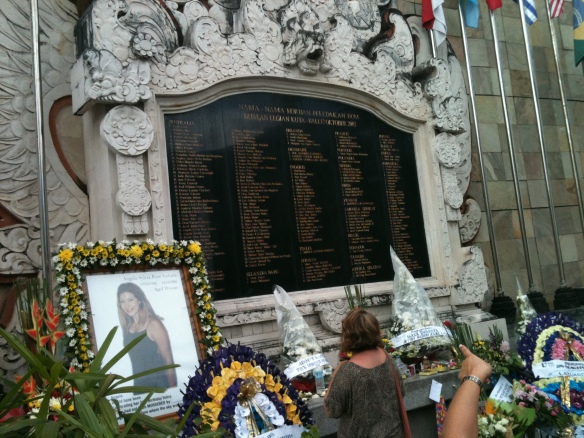 For the next two months, I will be travelling through and writing from Indonesia; the first stop on my itinerary was Bali.

Bali is a bustling place right now: the traffic flows, the tourists chatter, the smiles are abound, and there is general busy-ness in every direction. Even the surfer dogs are upbeat. But nine years ago, it was not always like this. Today, we commemorate the ninth anniversary of the first Bali bombing that took place in 2002; an explosion that tore through the Sari nightclub on a busy Saturday evening, claiming 202 lives and injuring 240.

I spent most of the day around the bomb memorial—a magnificent Hindu carving in the wall where the nightclub once stood, with bouquets of flowers hugging its base. My aim was to get a ground-level snapshot of how life went on a day like today.

I spoke to several Indonesian people living in Bali. There were many mixed emotions. Some affirmed how much life “returned to normal” and how safe they felt; others revisited the trauma of that night and the apprehension they still experienced.

One particularly loquacious man, let’s call him ‘E’, the owner of a tour company, chatted to me at length about the security situation. He explained that he felt safer, particularly with the development of counter-terrorism capabilities of police special operations units such as Densus 88 and BRIMOB. He believed that these groups were highly capable (they have also been trained by the US’ DEA and CIA, and by Australia’s AFP).

However, in line with recent calls by Indonesian President SBY, he agreed that he would feel more comfortable if the military provided more counter-terrorism support. In his opinion, there was simply more trust in the military as, after all, the operation that led to the discovery and arrest of a terrorist group in Aceh was supported by Kopassus (an opinion that I’m not entirely sure is grounded in fact but I respect his impression nonetheless).

Another man, WS, was working at a restaurant not too far from the Sari club in 2002. He changed jobs after the restaurant lost all its business after the bombing. He now works at hotel bar right near the memorial (where I buy my “teh panas dengan susu manis” everyday); a hotel that was completely destroyed by the explosion and rebuilt thereafter.

He told me it was particularly traumatic for his boss who had lost several friends in the blast. According to W, it was still heart-wrenching when photos of the bombing were shown or the topic raised. To illustrate the extent of the devastation, W pulled out a small album of photos taken the day after the bombing (see photo, right). With so many pieces of debris strewn around, the buildings looked as though they had been made from matchsticks and paper.

Next I spoke to some young shop assistants who were either still in school or just finishing their studies around 2002. Several of them gave frank yet brief answers to my questions. Some believed that the increased security and police presence made them feel safer yet they still felt a slight panic when there are crowds of tourists around.

One middle-aged man, M, who worked in a travel business in 2002 around the corner, told me he came rushing to scene of the bomb when it exploded. He said it was a shocking scene: bodies were lying everywhere. He rushed several victims to hospital with his car. One of his passengers, an Australian man from Melbourne named Mark, suffered a broken arm and broken leg. M and many others did not sleep at all for a while. While life has returned somewhat to normal for M (he still works and lives in Bali as before), he still experiences a sense of trauma about the Bali bombing. Meanwhile, Mark came back to Bali around one year ago to track down M and thank him for his help.

Two shop owners on Jalan Poppies II told me that, despite the increased security in Bali, they still did not feel completely safe; as long as tourists flock to Bali, they felt it was an easy target for terrorists. Other incidents such as the recent bombing in Solo and attacks on Indonesian police officers throughout the archipalego seem to affirm to them a level of danger replete with their sense of apprehension. Although they are further down Poppies II towards the beach, away from where the Sari club once stood, they pointed to the rooves of their shops, explaining to me that pieces of hand and scalp landed there after the explosion.

The sun was setting over the ocean while I was writing this from Bali. It was a heavy day. And I reflected upon a scene from earlier in the day: several helmet-clad, weapon-laden police officers from the bomb-disposal unit, Gegana, escorting Japanese embassy staff to the memorial. Traffic was stopped. An awkward, hurried commemoration was held before they were ushered back into their SUVs and driven away. Memories, however, cannot be whisked away so quickly. They remain, and we will remember.