On a chilly Thursday night, we descended upon Melbourne Town Hall to listen to our friend and colleague, Raoul Heinrichs, partake in the Wheeler Centre debate on Afghanistan. We came to hear whether the war effort would be savaged, whether Australian lives would be needlessly lost, whether there was hope for the Afghan people, or whether we, as a country, were wasting our time. We came to hear a lawyer, a scholar, a prominent feminist, a retired general, a young Afghan woman, and a philosopher. We came to hear their perspectives and experiences. We came to observe the public’s reactions; to hear how everyday people received and digested narratives of Afghanistan. I wanted to see whether people still remembered we were in war. 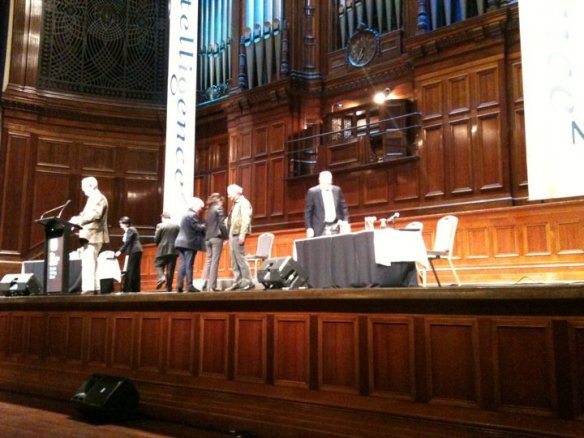 The topic of Thursday’s debate, “There is no justification for risking Australian lives in Afghanistan”, was always going to be hard to stick to. There was a sense of mission creep; a tendency for speakers to appeal to the broader merits of foreign intervention in Afghanistan, rather than centring on the specific risk to Australians (civilian and military) serving there. The affirmative team took the view that the intractability of the conflict dictated that no further Australian lives were worth risking. While each speaker had their own spin on this theme, they all concentrated on what they saw as the dire security situation on the ground, the lack of proper resourcing, and the lack of strategic interests beyond the ANZUS treaty (which, in Heinrichs’ view, we have already satisfied).

Central to the affirmative’s case was that the war in Afghanistan has been a debacle from the start. It lacked strategic direction and caused more problems than it sought to solve. Sadly, overlapping and slightly wayward directions by the first and third speakers undermined the overall coherence of their message, but in their moments, each speaker shone. In particular, lawyer Kellie Tranter impressed upon the audience that, in an environment of information shortages from the Department of Defence and Australian Government, it is difficult to appraise whether this war is worth our while. Strategist and scholar, Heinrichs, for his part, concentrated on the specific strategic interests to Australia in evaluating whether more lives lost in Afghanistan was worth the gain. Lastly, feminist Eva Cox’s gem was highlighting the disjuncture between our purported concern for the Afghan people and our treatment of Afghan asylum seekers with the recent Malaysia solution. While this was slightly off the mark, it nonetheless reflected the human complexities of the issue that the audience, no doubt, would react to.

On the negative side, MAJGEN (rtd) Jim Molan’s strong and authoritative introduction outlined the parameters of their case. The negative side would prove that there are sufficient strategic and moral imperatives for Australia to pursue in Afghanistan, and this was worth Australian lives. And indeed they did. Molan provided a frank assessment of the reasons why the strategic imperatives of regional stability and alliance management buttressed our cause there, but introduced more moral elements of the case. This latter theme dovetailed well with the impassioned and personal speech by Sonia Zaiee who reflected on her war-tainted childhood in Afghanistan. She contrasted these anguishing images with the hope of education and promise of reconstruction now possible from Australian presence, it seemed. Philosopher Peter Singer further ran with moral arguments for intervention, citing the plight of Afghan women, taking pains to stress that a vote for the motion signalled a ‘no’ for Australian aid workers in Afghanistan. While the negative team started on a strong note, the generalist approaches of the second and third speakers allowed the topic to stray away from the central element of the topic, namely “Why Australia?”

Overall, the debate represented the myriad views of the Australian public. And yet people have these divergent views about the conflict because of the piecemeal information and public narrative on offer. These opinions, coupled with questions from the audience, also highlighted, importantly, the lack of certainty with which we can say Australia’s presence there is a good or bad thing. There are indeed good things in Afghanistan for which Australian soldiers fight but there are inordinate and acute risks for what is a seemingly unclear overarching strategic interest.

And all while the debate continued, my live tweets of the event were punctuated with reports of an attack on Uruzgan province, the slice of Afghanistan for which Australia fights. The revelation of this attack, with its perfect timing, could have brought down the case of either side: for the affirmative, in support of a deteriorating security situation, and for the negative, in support of the need to maintain presence. For me, each side’s unwitting ignorance of the exact and immediate situation on the ground, with all its complexities, reflected the incomplete way in which we, the Australian public, seek to understand this conflict. And all the while, our theorising and arguing parallels another reality on the ground. Such is the nature of how this conflict plays out in the Australian psyche. Either way, the audience decided that the negative case had been the more compelling, and that there was justification for risking Australian lives in Afghanistan.

12 thoughts on “There is no justification for risking Australian lives in Afghanistan: a review”