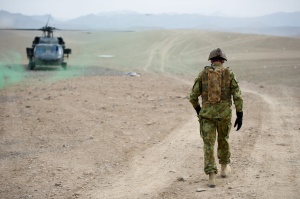 An article, ‘Repeat deployments ‘good for diggers’‘, in this morning’s The Australian detailed a departmental submission to the Defence Personnel Minister addressing concerns over repeated deployments of Australian Defence Force (ADF) personnel. According to the article, Australian studies showed a positive yet “not statistically significant” relationship between deployment and mental health indicators. Obtained by The Australian via Freedom of Information laws, it is worth examining the information supporting such a view, contained in the unclassified submission ‘Multiple Operational Deployments – Effects on Australian Defence Force Members’ (PDF), linked to from the article.

The main finding: the information supplied to a Minister informing him of the mental health effects of repeated deployments on the ADF was woefully lacking in comprehensiveness and detail.

First, only one Australian study (Curtis 2008) on the ADF mental health and repeat deployments was supplied. Research supporting the study was conducted between 2002 and 2007. At the time the submission was drafted, another study was being finalised, yet when considering the 11 years Australian forces have been in Afghanistan, from this submission there is seemingly an alarming dearth of information from which a proper appraisal of the effects of repeat deployments can be made.

Second, the information to the Minister did not disaggregate certain groups such as special forces. In the case of Afghanistan, as reported in yesterday’s press, the Special Operations Task Group (SOTG) is involved in high-tempo operations such as Operation TEVARA SIN 24 which involve difficult tasks such as the targeting and killing of insurgents. With many having already completed multiple deployments since October 2001 (Defence, PDF), their experiences in the AfPak theatre in particular should form an important basis for the Minister’s consideration of the human effects of such conflicts.

Third, if there were no other studies available, it must be asked, what must be done to collect, analyse and disseminate data to Defence decision makers quickly and efficiently? While another study on the frequency and duration of ADF deployments has since been published, academic publication channels are admittedly slow. Therefore, in circumstances such as warfare in which time lapses have significant ramifications for those in-theatre, what can be done to produce relevant and timely information without compromising its integrity?

That our Ministers are provided such limited information with which to make decisions on matters such as deployments is a matter of concern. That the submission is unclassified is immaterial. If repeated deployments have significant mental health effects, they should be made known to the public. Together with informed debate on the strategic and political gains of engaging in such conflict, information on the effects of deployment must form part of the Australian public’s and Government’s consideration of conflicts such as Afghanistan. Hopefully, it is not too late when we understand what the costs of our departmental and even media-muteness on this side of warfare has been.

1 thought on “The serious scarcity of Defence data”